Torremolinos is one of the main references of international tourism, due to its more than consolidated position as an emblematic destination on the Costa del Sol, “Pioneer Destination”.

Located on the Costa del Sol in Malaga, in the south of the province, it borders Alhaurin de la Torre to the north and Malaga city, Benalmadena to the southwest and the Mediterranean Sea to the east.

The municipal term has a coastal length of about 7 km accessible in its entirety, with a variable width of around 2 km. This makes Torremolinos an excellent municipality for those tourists who wish to visit the city.

Torremolinos has an area of ​​20 km² and is easily accessible via the A7 motorway. Road connections facilitate communication with Malaga airport, just 8 kilometres away. In addition, Torremolinos is located just 14 km from Malaga city, with excellent communications through the Renfe commuter service.

The number of inhabitants in Torremolinos is 69,166, and the city continues to expand the census, adding residents. Of the total figure, according to the INE, 27.89% are foreign citizens, highlighting the numerous British and Argentine colonies.

The average age of the inhabitants of Torremolinos is 42.34 years, with the widest population range being between 30 and 55 years old.

The history of Torremolinos with tourism begins in the 1920s, when the first hotel establishments such as the Parador de Montemar or the Castillo del Ingles were opened.

Then, some of the wealthiest families in the province began to choose Torremolinos as a place of second residence and thus began the construction of houses and buildings, some of which have a unique architectural attraction, as is the case of the “Casa de Los Navajas “. 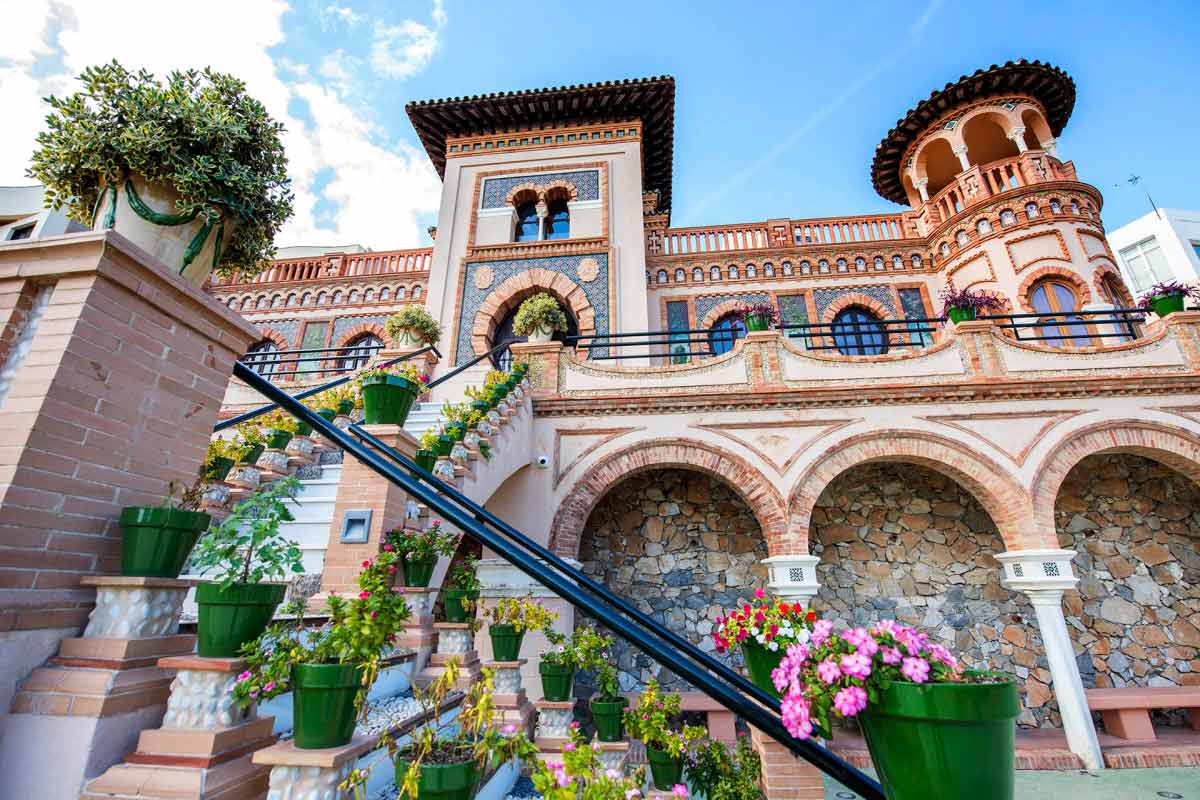 For the next two decades, Torremolinos continued to be a small fishing village, until, in 1950, with the arrival of mass tourism, especially from other regions of Europe, the city began to experience an exponential change in population and infrastructure. 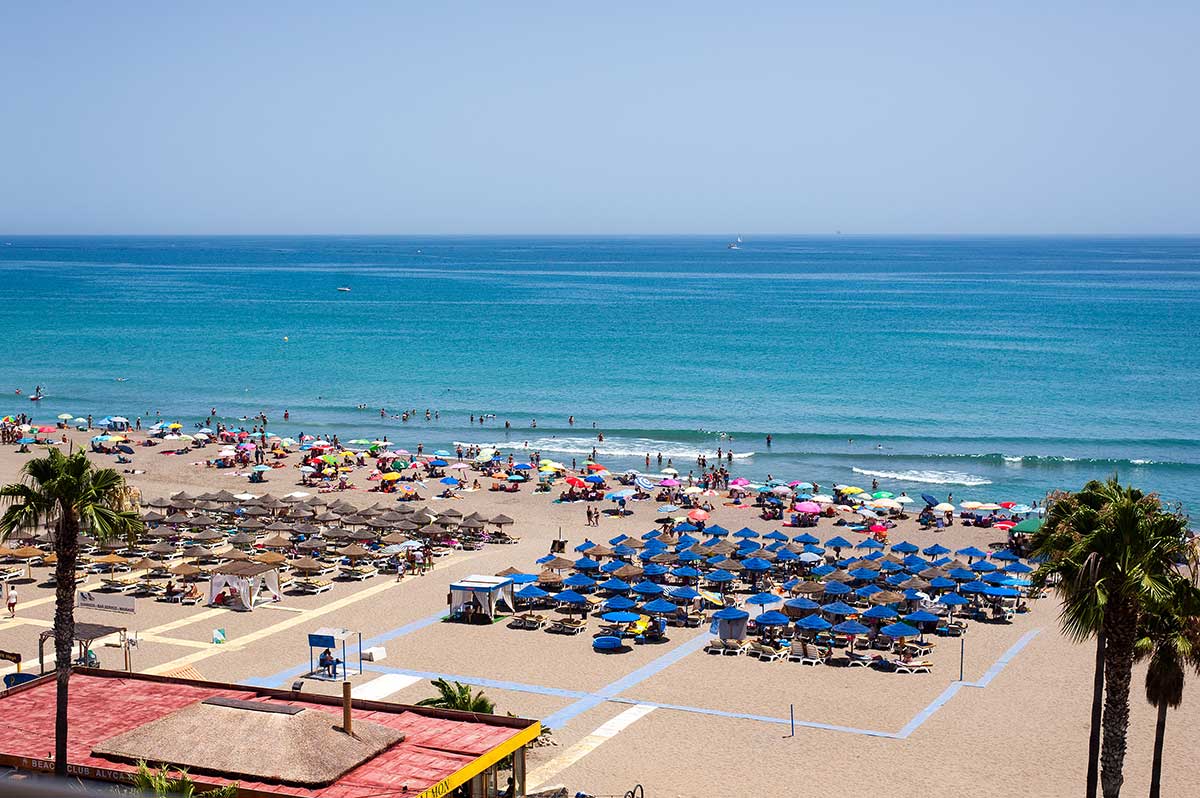 The 1960s and 1970s were the key years in the shaping of Torremolinos, a legendary benchmark for international tourism. Since the tourist boom, the city has received multiple visits from internationally renowned people.

Its economy is strongly marked by tourism, due to the strong commitment to its development in previous decades, which has made Torremolinos the municipality of Andalusia with the most capacity for hotel accommodation, with almost 28,000 beds available in the city.

Torremolinos has also obtained the Smart Tourist Destination certificate, a recognition by the State Society for the Management of Innovation and Tourism Technologies (Segittur), belonging to the Secretary of State for Tourism, which positions the city as a destination that is committed to innovation and technology to advance in tourism.

Several instruments have been used to improve the management and perception of Torremolinos, such as:

However, Torremolinos’ ambition as a city is not satisfied with maintaining its status as a tourist city and, therefore, the latest actions and projects developed have transformed its economy towards more solid sectors, away from the clichés of sun and beach tourism.

To promote the creation of new companies, Torremolinos has an office of the Business Development Support Centre with the aim of advising new entrepreneurs and companies that want to establish their companies here, an initiative that made Torremolinos recognized as an entrepreneurial municipality in the year 2018.

In addition, thanks to private initiative, the city has a co-working space in the Los Alamos area (Synergia Coworking).

In the municipality is the Pinillo industrial park, which has a multitude of companies and industrial buildings, related to the automotive and textile sectors, among others. 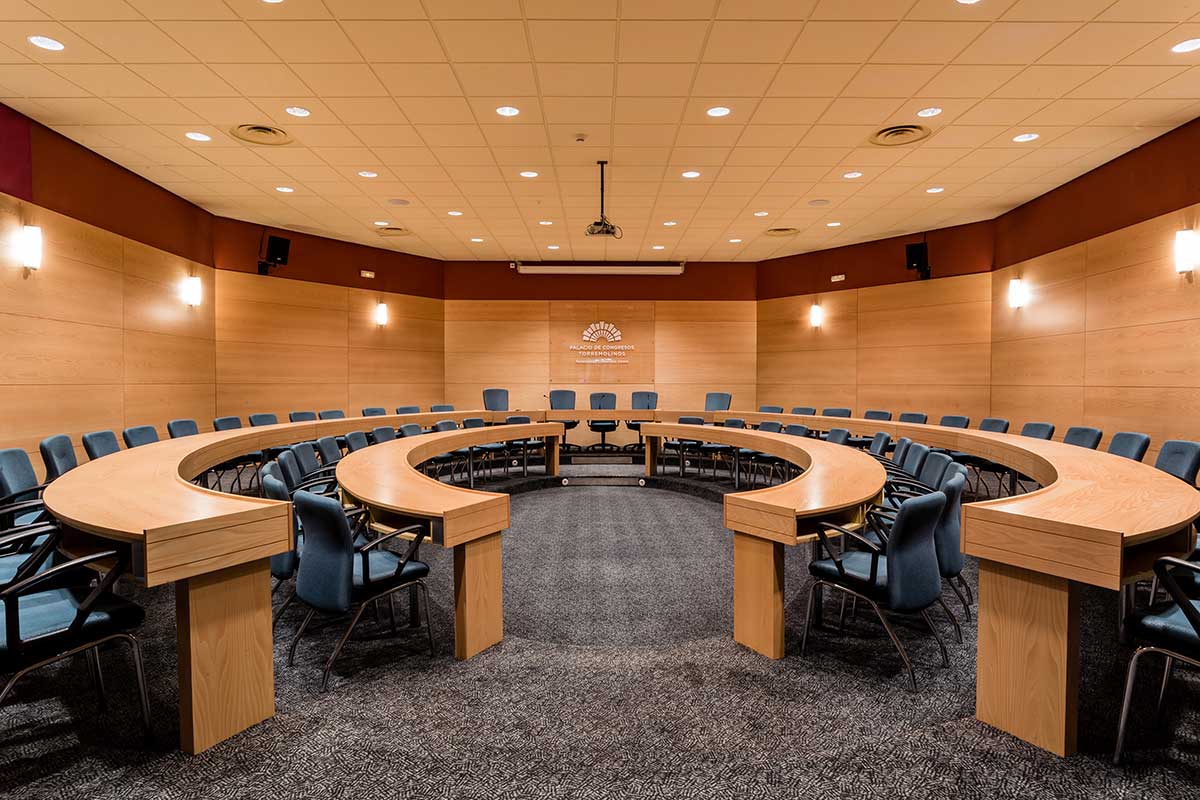 Regarding the equipment, facilities and companies in the field of events, meetings and conferences, the Costa del Sol Conference and Exhibition Centre stands out. It has 20 rooms divided into 3 Auditoriums, 7 Commission Rooms, 6 Meeting Rooms, 2 Secretaries, and 1 Multipurpose Room.

Regarding leisure for citizens and tourists, Torremolinos offers:

– Aqualand. Water park that has 18 attractions.

– Crocodile Park. Halfway between a theme park and a zoo specializing in crocodiles.

– Beach bar tourism: gastronomic experiences in the typical beach bars (chiringuitos) located along the coast of the municipality characterized by their seafood products and the “espetos” (traditional cooking technique).

– Playa de los Álamos. Emblematic place of the municipality that stands out for having the Blue flag qualification, where you can see a beautiful sunset.

In the municipality there is also the recently renovated Torremolinos Gourmet Market where you can enjoy a unique gastronomic experience of “Malaga flavor” products.

-A CITY FOR PEDESTRIANS

It should be noted that the municipality of Torremolinos has a large pedestrianized area in the city centre that contains a wide variety of shops, stalls and a commercial environment. 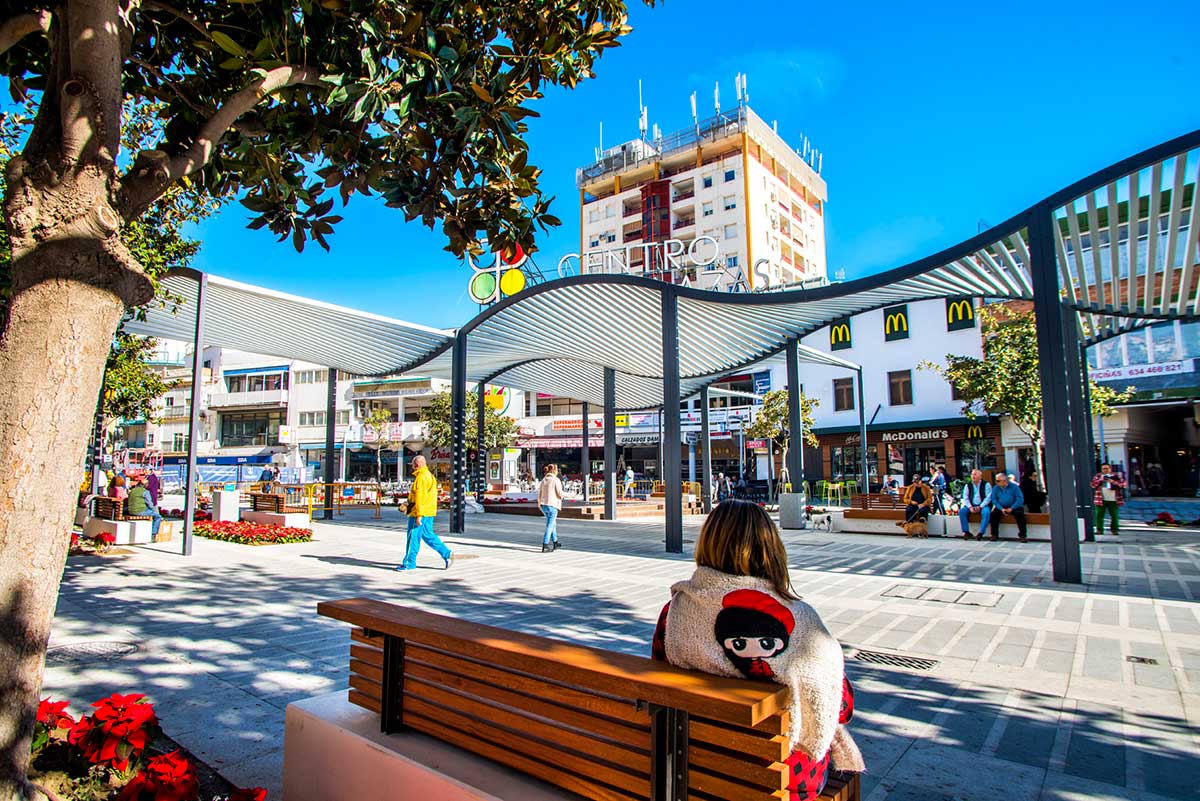 The pedestrianized area goes from the Plaza de la Independencia, where the Gourmet market is located, passing through the commercial and busiest areas of the municipality, made up of the Plaza Costa del Sol, the iconic San Miguel street, the Plaza San Miguel and the Cuesta del Tajo.

In the historical field the occupation of Torremolinos takes place very early, as evidenced by the important archaeological remains from the Paleolithic and Neolithic periods found in the Cueva del Tesoro, Cueva Tapada, Cueva del Bajondillo, etc.

-Roman age. The Via Augusta that ran from the Pyrenees to Gadir (Cadiz) passed through Torremolinos. There are also traces of the Roman presence in a cemetery that was located in the current neighbourhood of Castillo de San Luis, a salting industry in La Cizaña and news of some hot springs given by the Romanist Rodríguez Berlanga on the descent to La Carihuela via El Morro, which separates the two coastal areas La Carihuela from Bajondillo.

-Arab period: specifically from the Nasrid period is the Torre de Pimentel. It is a watchtower named in the Malaga Ordinances of 1497 as “Torre de los Molinos” and, later, as “Torre Pimentel”. It is said that it was a tribute to Don Rodrigo Pimentel, Count of Benavente who militarily helped the Catholic Monarchs in the conquest of Malaga.

Later, in the 18th century, two installations are known that reach the category of coastal batteries, integrating themselves into the defensive systems planned to defend the Malaga coastline and the Strait of Gibraltar.

-The mills and the water

The history of the municipality is undoubtedly linked to that of the mills. There is evidence of its use for several centuries, thanks to the fact that the various springs in the area made its development possible. Some were used for flour, others for the production of brown paper or for grinding bread. The latter was the function of the “Molino de Inca”, the oldest. Today, this historic place is home to a beautiful botanical garden of more than 40,000 square meters. 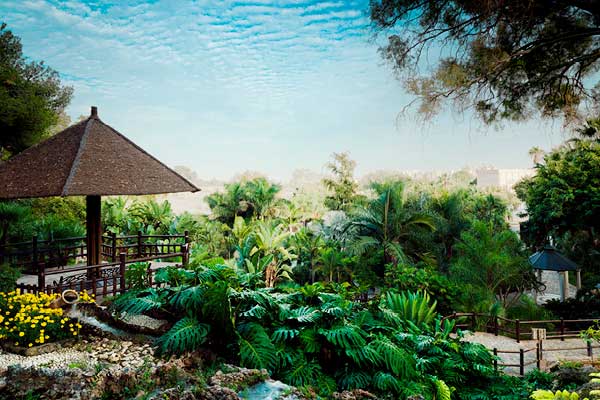 The city of Torremolinos stands out for being a municipality with a rich cultural life, where tradition and modernity come together throughout the year. 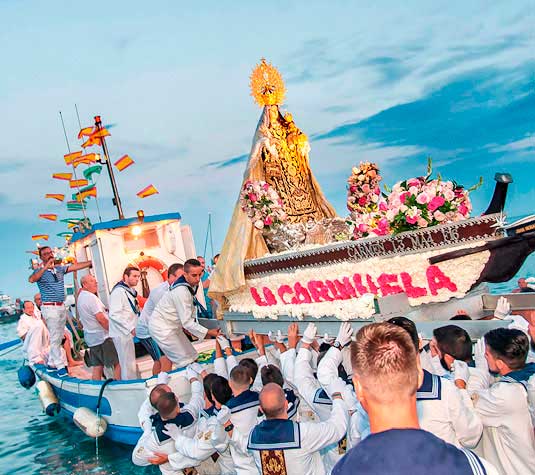 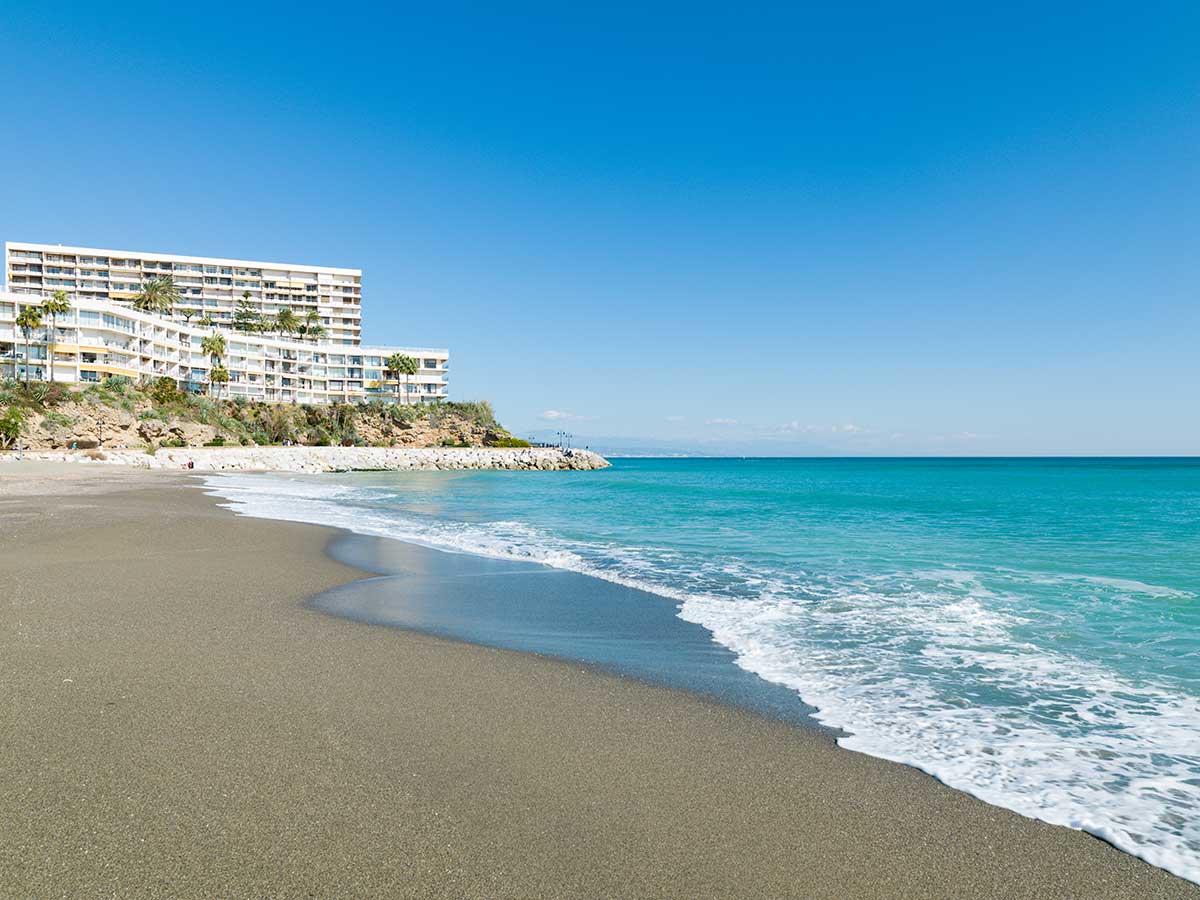 The city welcomes more than a million visitors every year and has the largest and best hotel offer in Andalusia. Torremolinos offers 28,000 quality hotel beds, almost twice the number of Malaga city, which allows a high percentage of occupancy throughout the year, making the municipality not so dependent on the summer season.

A tourism emporium that has reinforced its leadership as a multi-destination, multiplying its offer in leisure, culture, events, shopping, conferences and incentive segments, supported by a powerful hotel offer, sports infrastructures and an attractive and diverse offer of leisure and gastronomy for the visitors.

Torremolinos is located just 15km from the provincial capital and that makes it benefit from the powerful infrastructure network that includes the Malaga-Costa del Sol airport and the María Zambrano high-speed train station.

Torremolinos has an economy that seeks to reduce its dependence on the seasonality of tourism, promoting the installation of industries in the Pinillo industrial estate.

Torremolinos has an average annual temperature of about 20º and more than 300 days of sunshine a year. This means that the municipality can enjoy its coasts and outdoor activities throughout the year.

5-Support to companies and entrepreneurs

The Andalusian Center for Entrepreneurs -CADE- in Torremolinos offers support to business initiatives, advice to entrepreneurs in the process of creation and consolidation of their activity, the search for financing through subsidies and bank loans, training for entrepreneurs, as well as the implementation of programs and actions to promote an entrepreneurial culture, aimed at awakening the entrepreneurial spirit and detecting business opportunities for new initiatives.

Torremolinos is a cosmopolitan city where leading international conferences are held.